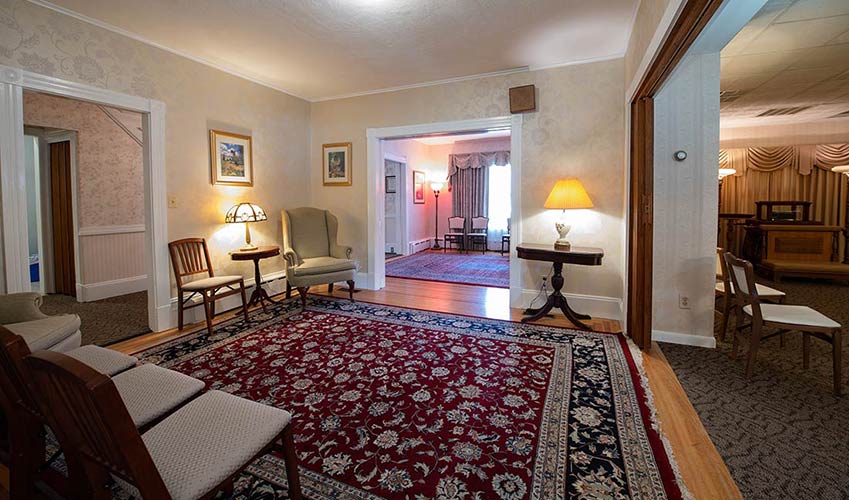 The Tewksbury Funeral Home was founded in 1957 by Walter and Gloria (Roux) Deputat. The name was chosen specifically to reflect their commitment to serve any ethnic, religious, or cultural segments within the town and our neighboring communities.

The idea of serving the community through funeral service was conceived during WWII. As a B-17 and B-24 Bombardier, Walter, who would earn a Distinguished Flying Cross, passed non-flight time discussing the many aspects of funeral service with a fellow aviator, who was raised in a family dedicated to funeral service. Walter liked the idea of a career that could make a difference in his community and help others at the same time. At the close of WWII, with the support and backing of his newlywed wife, Gloria, and while working two jobs to support his fledgling family, he attended the New England Institute for Funeral Service in Boston. Through the G.I. Bill he was able to pay for his education and purchase the "Marshall House”, as it was known, on Main Street. After years of renovation and several additions, they transformed the single family residence, into a funeral establishment. So began the distinguished career of this humble couple, first generation Americans.

The family struggled during the first eight years in funeral service, and it was only in 1966 that things started to turn around and the growth was slow but steady. The commitment to innovation, change, and improvement was the driving force during this time period. The family's spirit of public service through many fraternal and social activities helped create many lifelong and loyal friendships.

Walter's sense of community was apparent when you look at his efforts to charter the Tewksbury-Wilmington Elks Lodge, and the Tewksbury Lions Club. Walter was honored by the Tewksbury Lions Club with a Melvin Jones Fellowship through Lions International. Walter's many civic affiliations also included the Veterans of Foreign Wars, the American Legion, the former Tewksbury Veteran's Association, as well as numerous national and state professional organizations.

However, Walter and Gloria's commitment to contain costs to allow reasonable and fair prices was considered the touchstone of their success. This commitment to fair prices has been the cornerstone and guiding principle for more than 65 years.

In 1976, Walter and Gloria’s youngest son, Joel, joined them as the second generation in funeral service. After receiving a BSBA in Accounting, and completing a program at the New England Institute for Funeral Service Joel received his licenses in funeral service in 1978. Joel purchased the family business from his parents in 1984. The years of training from a caring father, made the father to son transition seamless and transparent. The same standard of excellence and commitment to the community had been successfully passed to the second generation.

In 2020 after 40 years of dedication and service to the families of Tewksbury, Joel retired from the day to day operations of the funeral home. The McDonough family, a funeral service family themselves since 1885, purchased the funeral home from the Deputat family. The McDonough family consists of John L. McDonough, a fourth generation licensed funeral director since 1975 and his sons, Jack McDonough and Joe McDonough, who have been licensed funeral directors since the early 2000’s. The McDonough family has worked with the Deputat family since the 1950’s and will continue to operate the Tewksbury Funeral Home as it was founded. As a family business, independently owned and operated with a commitment to fair prices, honest service, care for the community and humility.